A squirrel in the hand is worth …

B) Two in the nuts (see above)

C) A dropkick to the boot (You’re a sick fuck)

The correct answer is F) A new beginning. Don’t bother pointing out that there was no E. Everyone who knows me knows I have an affinity for the F.

Anyway, a secret, a squirrel, and some nuts are all part of my story. If you’ll kindly follow me into the Wayback machine, Mr. Peabody, I will explain. Please keep your hands inside the ride at all times.

Like many kids, I thought I knew what I wanted to be when I grew up. I loved animals, so maybe a veterinarian? Or perhaps a private investigator, a sleuth like Nancy Drew or Columbo, or a Cruise Director like Love Boat’s Julie, yippity skippity and on perpetual vacation. Deep down, however, my specific role on this planet eluded me. The death of friend at age seven left me confused, and although I seemed like a normal kid on the outside, I was a lonely one, a girl who watched the other kids from my bedroom window and wondered why I never quite fit in. I even felt quite disconnected within my own family.

When I bumbled into my teens, I still had no clue as to why I was alive. I faked what I could at school, tried and failed to fit in to any one clique, and left for college feeling as lost as ever. I knew something was wrong, but I couldn’t put my finger on it. With some professional insight in the early 90s, doctors discovered what I already knew: I was clinically depressed. I was promptly medicated. One of the first people on Prozac, I followed up with a host of other selective seratonins, all with varying degrees of success. Later, my diagnosis was fine-tuned to manic-depressive, or bipolar. Bipolar II, to be exact. Different meds. Same cluelessness. I felt like one frothy little whitecap flailing on a tidal wave of uncertainty, forever crashing into and subsequently adrift on a sea of half-assed career attempts, dumb-ass relationships, and sad-ass apartments. Along the way, I collected a beautiful dog, several ungrateful cats, and a vague disinterest in life. I was a scrambled mess, heavy on the cheese. After a man I loved tossed me aside like moldy cheddar, I grew even more depressed. Not only did I have none of my shit together, I didn’t even know what shit I wanted. Career? Marriage? Kids? … Bueller?

What the hell does this have to do with secret squirrel nuts?

Patience, Peabody. Fifty years is a lot to sum up in a few paragraphs…

When I moved back into the same sad-ass apartment where I had previously lived (it seemed like the go-to complex for wayward singles, only less Melrose Place, more  Roseanne), I started feeding squirrels. Used to stuff my pockets with peanuts so that when I walked to my car, they would recognize me and scamper up, eager for their treat. During one particularly frenzied feeding, I noticed that squirrels didn’t have any of the identity crises that plagued me. Watching them, I took note of their innate senses of confidence, determination, and purpose. Squirrels are Type A. Call them pesky, call them cute, call them irritating-as-shit rodents, what you can’t call them is lazy. They bustled about relentlessly in their pursuit of the nuts I tossed at them, and when they found them, they gathered, transported and stored them. In short, the squirrels had an agenda. A purpose. A passion. They had their shit together. They had their nuts.

And I was jealous. The only thing we had in common? They foraged for nuts. I was nuts.

That’s not the point I was trying to make but bear with me a little longer.

My depression, anxiety, and a plethora of self-esteem issues trudged with me into my thirties, along with the bevy of pharmaceutical crapshoots. While most of my friends married, started families, and settled into meaningful careers, I still had zero notion of what to do with my life. I finally succumbed to both societal and internal pressure, fake-forged a career path at a major corporation and snagged a decent husband. I thought that would be where my story would get more interesting, or at least more stable. But all it got was… stale. I was stuck in a job I didn’t want, a marriage I wasn’t happy in, and a life that didn’t fit.

I remember typing “Why am I so unhappy?” into a search engine and scouring the internet for the answers. I started a petsitting business and took some travel classes after quitting my corporate job. But despite a supportive husband and a thriving business, I still Was. Not. Happy. Not even close. The tidal wave of my twenties returned with a vengeance, drowning me with a riptide of This Is Not My Life-isms. If I thought few people understood why I left a great job to pick up dog crap and scoop litter, even fewer comprehended why I left my cushy marriage simply because I “wasn’t happy.” I was, in a word, Stuck.

Which leads me to The Secret, The Squirrel and The Nuts.

The secret was something I’ve only recently figured out. In my life, I lacked what the squirrels did not: an agenda. A purpose, a passion. Nuts. (Hold the snarcasm!)

For over fifteen years now, my lifestyle has afforded me an opportunity to both spend all day in jeans and take pictures, which is something I do enjoy. But while some of my friends grapple with their first midlife crisis, I head resolutely into my second. I’m finally becoming unstuck, my Squirrel Theory alive and kicking. In the past two-and-change years, I’ve weaned myself off all pharmaceuticals, written a complete-although-under-constant-revision book, started several more, and have taken up photography with a vengeance, especially after one of my eagle photo shoots went slightly viral on Facebook.

The journey of a thousand miles begins with a single step. (Lao Tzu said so.) Similarly, I believe the happiness of a thousand squirrels lies with a single nut. And finally, at long last, this “sqirl” has found her nut. Actually, I found two. (I’ve heard they’re better in pairs.) Writing and Photography. This blog will feature mostly-true anecdotes (embellished for the hell of it, cuz it’s my blogpost and I’ll lie if I want to) but also random musings that flit through my brain, emulating anyone from Stuart Smalley to Dr. Wayne Dyer. Off-the-beaten-path photographs will also be featured, and to keep things unpredictable, will be accompanied by random writing sprints that marry a photo with a haphazard fictional narrative.

So there it is. The explanation of the Secrets, the Squirrels and the Nuts.

And so, on my quest to define just what the hell I’m doing on this planet, I have undefined it first. I am not going to get a real job and be miserable again. I am not going to sit around and live the next half, third or quarter of my life unhappy. I have found my nuts, and goddammit, I’m going to crack those fuckers in half and chew. Squirrels, you’ve been warned. 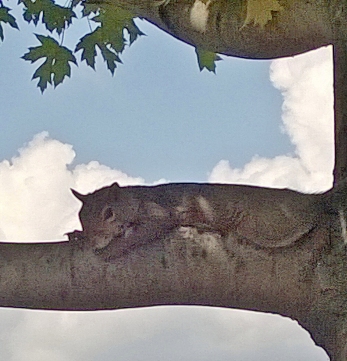 ** I’ve decided to add a music portion to my blog posts. My friend Michael from the band Get Set Go has graciously allowed me to link to his Bandcamp.com page and so for this first post, I offer you this song. Get Set Go: The Secret of My Success